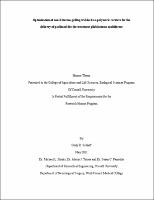 Glioblastoma multiforme (GBM) is the most aggressive primary brain cancer in adults and unfortunately, characterized by a poor prognosis. Standard treatments like surgical resection and chemotherapy are marginally effective. Despite aggressive therapy, the disease ultimately recurs. Local control-released chemotherapy may be administered via carmustine (BCNU) polymer-loaded biodegradable wafers (Gliadel® wafers) to the cavity upon surgical resection. One significant limitation of this modality is the instability of BCNU in aqueous media. Moreover, the effective therapeutic distance of the wafers extends only a few millimeters from the resection cavity, while recurrences occur often centimeters away. New carriers and pharmacological agents are being actively explored. One such carrier is derived from a novel set of poly(DL-lactide-co-glycolide-b–ethylene glycol-b-DL-lactide-co-glycolide) (PLGA-PEG-PLGA) thermo-gelling tri-block copolymers capable of sustained release of paclitaxel. Paclitaxel has been shown in vitro and in vivo to be effective against glioma cells while having a much slower degradation rate than carmustine; this slower degradation rate may allow deeper penetration into the brain, and as a result, effective concentrations can be sustained for longer periods. We seek to test whether thermo-gelling hydrogel carriers of paclitaxel could result in novel therapies for the treatment of GBM. We also seek to optimize the configuration of the thermo-gelling hydrogels within the resection cavity to maximize drug delivery to the surrounding brain.