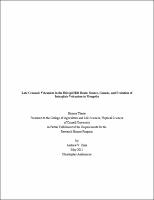 Diffuse, intraplate volcanic deposits are prevalent throughout Mongolia. This study sought to examine Late Cenozoic lavas (9.5-17.1 Ma) from the Hövsgöl rift basin in order to better understand their source, genesis, and evolution. The relationship of these volcanic rocks to the Baikal Rift Zone (BRZ) and the extent to which these lavas are involved in, or derived from, rifting has important implications for lithospheric development of Mongolia and Central Asia. The alkaline basalts have similar light rare earth element enrichments (La/Yb = 9.1-31.9) and 87Sr/86Sr ratios in the range of .7039 to .7050. Major and trace element and isotopic data reveal that low degrees of partial melting of garnet lherzolite occurred at depths greater than 65 km. Enrichment in fluid-mobile elements (e.g. Sr and Ba), lower La/Nb ratios, and a calc-alkaline trend suggest that hydrous minerals may have contributed to the melt. Nb enrichment (>35 ppm), along with the melting of hydrous minerals, may be attributed to the melting of a metasomatically enriched lithospheric mantle source. The mixing of minor asthenospheric upwelling with a volatile-rich, metasomatized lithospheric mantle may have produced melts without requiring extremely elevated temperatures, consistent with other published studies that show a small, shallow thermal anomaly under Mongolia.