Children's Perceptions of Mechanical Knowledge as a Function of Gender 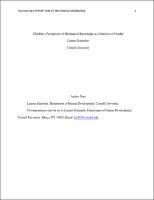 This study examined children's perceptions of the mechanical knowledge of others as a function of gender. Children ages 3-8 watched videos of male and female informants fixing toys in one of two conditions: either the boy and the girl both succeeded at fixing the toys, or the girl succeeded and the boy failed. The children then answered questions about the informants' abilities to fix other toys. An omnibus ANOVA failed to yield any significant effects of the sex of the informant, though there was a significant effect of condition across age groups and a significant effect of age in the Sally Fixer condition. There is some evidence that nonconformity with gender stereotypes influences children's opinions on informants' play abilities. Further research is needed on the development of children's gender stereotypes, given that children do express gender biases in other contexts.