The Desirability of Sexually Experienced Friends 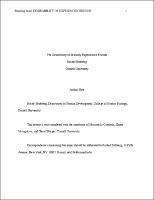 This study investigated the influence of one's sexual history on his or her desirability as a same-sex friend. Participants (N = 790) completed an online survey, in which they evaluated one of 6 hypothetical targets. Descriptions differed in the information they provided on the target's sexual history. It was predicted that permissive targets (i.e., those with 20 partners) would be rated as less desirable friends than less permissive targets (i.e., those with 2 partners). This effect was expected to be moderated in three ways: 1) women would rate permissive targets more harshly than would men, 2) targets whose partners had been romantic would be evaluated more favorably than those whose partners had been casual, and 3) participants with higher numbers of partners would evaluate permissive targets less harshly than would those with fewer partners. Results suggested that permissive targets were evaluated as less desirable friends than were less permissive targets. Hypotheses on the moderating variables were generally upheld, though the strength of their effects varied across measures.