Assessment of Risk to Drinking Water from Turf Pesticide Runoff 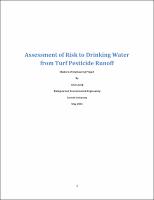 A human health risk assessment was performed on pesticide runoff from lawns and golf courses for 9 U.S. locations using a fate and transport modeling program. Pesticide concentrations for 37 turf pesticides registered for application on golf courses were compared to drinking water standards. A maximum 24 hour lake pesticide concentration was used for an acute risk assessment and a mean daily lake concentration was used for a chronic risk assessment. Our results show that a number of the pesticides posed a potential risk as evidenced by a risk quotient (RQ; concentration divided by standard) over 0.01. For fairways, both iprodione and 24-D produced acute and chronic risk at more than 3 locations. Potential risk was only found for myclobutanil applications to greens and tees. MCPA, oxadiazon and 24-D applied to lawns posed both acute and chronic risks. The highest concentrations were seen with acephate applied to fairways with acute RQ≥0.01 in 4 locations and in oxadiazon applied to lawns in Houston with chronic RQ≥0.01. The assessment was based on simulations using TPQPond, a model developed for predicting pesticide runoff and resulting concentrations in a receiving pond, lake, or reservoir. The risk assessment followed general protocols used by USEPA in their pesticide concentration model, FIRST, but with more realistic methods of determining reservoir flow characteristics, pesticide mass balances and region specific weather data. Risk levels were found to vary with location and turf type. Pesticide concentrations were highest for fairways and lowest for greens. Greatest impacts were observed in areas of high annual precipitation rates and long growing seasons whereas lowest impacts were observed in areas of low precipitation rates. These results suggest that persons living in heavy rainfall areas may have higher exposures of turf pesticide in their drinking water than would be predicted by EPA risk assessments.