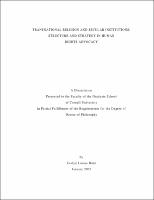 TRANSNATIONAL RELIGION AND SECULAR INSTITUTIONS: STRUCUTURE AND STRATEGY IN HUMAN RIGHTS ADVOCACY Evelyn Louise Bush, Ph.D. Cornell University 2005 This dissertation examines the influence of international institutions on religious NGO claims making. An analysis of religious participation in Human Rights addresses three general questions. First, how has the rationalization of the human rights field influenced levels of religious mobilization in human rights? Second, how, and through what mechanisms, do religious NGO frames transform as a result of participation in secular international institutions? Third, how, and through what mechanisms, is access to human rights institutions associated with religious and regional characteristics of NGO? These questions are addressed through analyses of 24 key- informant interviews, United Nations documents and press releases pertaining to the UN Declaration of Commitment on HIV/AIDS, and an original dataset comprised of 591 religious human rights organizations. First, religious NGO foundings over the past century show that religious movement into the public sphere increased while Human Rights was becoming a highly bureaucratized regime with international institutions at its core. Interviews with religious NGO members confirm that the increase in religious NGO foundings over the past fifty years does not indicate cooptation of religious NGOs for the pursuit of secular agendas. Rather, religion still serves as the primary motivating force behind human rights activism among religious NGOs. Second, analyses of interviews and United Nations documents reveal two strategies ? discursive secularization and procedural rationalism ? that religious groups use to assert claims, to create alliances with other NGOs, and to minimize conflict in situations where religious and secular human rights norms conflict. Religious NGOs use these strategies to capitalize on advantages and mitigate disadvantages associated with religious affiliation in terms of alliance formation and competition for funding within Human Rights. Third, binomial logistic regression reveals that NGO consultative status with international institutions systematically varies by religious affiliation and location of secretariat. This variation is explained by the intersection of two types of variables: those indicating conformity to hegemonic principles and those indicating organizational resource capacity. In spite of institutional differentiation, religion not only remains relevant in the public sphere, but also continues to be influenced by relationships with states at the transnational level of analysis.