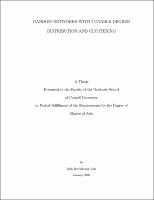 We present an algorithm for generating random networks with arbitrary degree distribution and clustering (frequency of triadic closure). We use this algorithm to generate networks with exponential, power law, and poisson degree distributions with variable levels of clustering. Such networks may be used as models of social networks and as a testable null hypothesis about network structure. Finally, we explore the effects of clustering on the point of the phase transition where a giant component forms in a random network, and on the size of the giant component. Some analysis of these effects is presented.