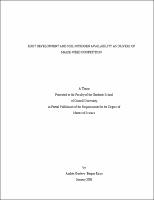 A mechanistic understanding of crop-weed interaction has been used in dynamic simulation models of the growth of crop-weed mixtures to estimate the outcomes of competition, including yield losses, and predict the effects of management practices. In the case of an annual crop such as maize, when plants in mixtures begin to compete for light during the early growing season, the relative position of the leaves of the crop and weeds determine the light captured by the plant and its subsequent growth and yield. Thus the total area and distribution of leaves, and factors that can change those characteristics will impact crop competitiveness. Below ground resources such as nitrogen or water availability, are thought to be among those factors that influence leaf area and distribution. However due to the complexity of studying competition for below ground resources, little information has been gathered to support this assumption. The specific objectives of the present study are: i) to characterize early season root system growth for maize and four weed species and to determine the effects of above and belowground maize competition on maize and weed root system development; ii) characterize, in comparison with maize, the early and exponential growth phases of four weed species; iii) identify and quantify the changes induced by nitrogen stress in plant architecture and morphology that could be important in determining weeds and maize success in compete for resources in a mixed maize-weed stand. To achieve the first objective, this study utilized an herbicide injection technique to assess the comparative root geometries and temporal development patterns for redroot pigweed (Amaranthus retroflexus L.) and velvetleaf (Abutilon theophrasti Medic.) in association with maize (Zea mays L.); and redroot pigweed, velvetleaf, maize, common lambsquarters (Chenopodium album L.) and giant foxtail (Setaria faberi Herm.) in monoculture. The second and third objectives were addressed in a separate glasshouse experiment where maize, A. retroflexus, A. theophrasti, S. faberi and C. album where grown in sand culture at varying soil solution nitrogen levels (0.2, 0.5, 2, 5 mM L-1 NO3). Root system vertical and lateral growth was more variable among species than between different soil types, suggesting that root development in the absence of important soil physical impediments is a plant intrinsic characteristic. For A. theophrasti and A. retroflexus, root system volume was proportional to plant above-ground biomass. Thus, plants growing under a competitive environment and having reduced above-ground biomass have a proportionally smaller root system, potentially compromising their ability to capture and compete for soil resources with their neighbors. This study also provides insights into the likelihood of belowground competition occurring between plants based on the likelihood of root system overlapping and exploring the same soil regions. Increasing levels of soil nitrogen significantly increased relative above-ground plant biomass in a similar fashion for maize and the three broadleaf weeds, but S. faberi was comparatively unresponsive to higher levels of soil nitrogen. Diverse growth sensitivities to soil nitrogen may in part explain the variability of competitive relationships commonly observed under field conditions. Our results demonstrate that species do not respond uniformly to changes in soil nitrogen status and those differential responses must be addressed when considering the impact of soil fertility on competitive outcomes in agricultural systems. Furthermore, the root development study indicated that the chance of a crop-weed mixture exploiting a common region of soil or finding an enriched patch of soil are low at the early growth stages, suggesting that localized differences in nitrogen availability could drive the competitive relationship in favor of the crop or the weeds.