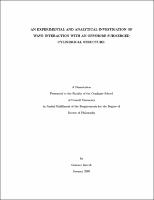 The interaction of periodic waves with a model offshore submerged water intake structure was examined experimentally and analytically. Two wave conditions, with long and short wavelengths relative to the structure?s characteristic length scale were tested. Flow kinematics were characterized using particle image velocimetry and the wave motion measured with capacitance wave gages. Pressure distributions at key locations around the model as well as inline and uplift forces were measured with an array of pressure sensors distributed around the model. The two types of waves tested simulated the maximum and minimum typical conditions estimated to be present on existing intake structures. Additionally, flow visualization was carried out for a solitary wave traveling over the structure to better characterize the processes that occur in the vicinity of the structure. A complete description of the flow kinematics is presented for the long wave case. The main vortex patterns are related to the wave motion induced inline and uplift forces. Large scale vorticity patterns generated on the weather and lee sides of the structure influence the loading of the structure, primarily the uplift force where large uplift coefficients were found. The dominant vorticity pattern, a vortex filament pair, was linked to the maximum uplift coefficient. The inline force coefficient found is similar to coefficients previously reported for cylindrical structures. The ratios of total vs two component turbulent kinetic energy were estimated. Results disagree with typical ratios found in other studies and generally used to estimate total kinetic energy when one component of velocity is missing. However, large turbulent kinetic energy uncertainty levels were found and caution is advised when using this information. An analytical model based on small amplitude wave theory and irrotational flow solved using a eigenfunction expansion method is presented. Results are compared with experimental values measured for a short wavelength case, conducted specifically to verify and validate the model. Horizontal and vertical velocities as well as inline and uplift force coefficients are in good agreement. Force coefficients were also compared with the long wavelength case results and similar maximum values were obtained. The model is capable of estimating wave scattering, flow kinematics, and wave induced loading on the structure in the diffraction range.