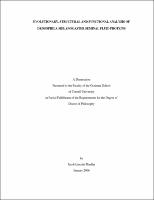 During mating, Drosophila melanogaster males transfer accessory gland proteins (Acps) in the seminal fluid, along with sperm, to their mates. Acps mediate behavioral and physiological changes in mated females. These changes include increases in oogenic and egg-laying rates; and decreases in lifespan, sperm storage, and female's propensity to remate. A previous evolutionary EST screen in D. simulans identified a large candidate set of Acps. I organized a lab-wide annotation and male-expression confirmation of these candidate Acps in D. melanogaster, thus generating a collection of 52 stringently-selected Acps. Comparative structural modeling was then performed on 28 Acps which fall into several protein classes, including regulators of proteolysis, lipid modification, immunity/protection and cysteine-rich secretory proteins. Many of these same protein structural classes are found in the seminal fluid of mammals, suggesting a conservation of seminal protein roles. A cross-species evolutionary analysis was also performed on the 52 Acps, which identified many rapidly evolving Acps (an excess of non-synonymous/synonymous substitutions, absence of homologs in D. pseudoobscura, and low codon bias). To address the functions of Acps two reverse genetic techniques were utilized. First, ectopic expression lines were generated for 22 Acps and unmated females ectopically expressing individual Acps were tested for functions in egg-laying, receptivity, lethality, and antibacterial activity. These analyses identified two Acps that are toxic upon ectopic expression and three that enhance a females? immune defense. Though ectopic expression provides a high-throughput analysis of individual Acp function, it does not provide as rigorous a test of function as a knockout. A knockout of Acp62F, a protease inhibitor, was generated via homologous recombination. Protease inhibitors have been suggested to function in multiple reproductive processes, such as protecting sperm or regulating seminal proteins processing. I found that the sperm of Acp62F null males are less effective in preventing displacement of a subsequent male?s sperm than normal males. Acp62F, which localizes to the sperm storage organs, may thus play an important role in competition between sperm from multiple males within the female.

Comparative structural modeling and inference of conserved protein classes in Drosophila seminal fluid Proceedings of the National Academy of Sciences: 101, 13542-47