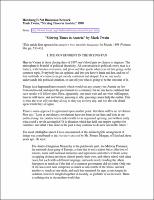 Mark Twain spent two years (1897-1899) traveling in Central Europe, staying mostly in Vienna. While there, he reported on the famous sittings of the Austrian House in 1897 during which the conservative government sought to push through the renewal of the Ausgleich [Compromise] agreement against the will of the German Liberals (Twain calls them "the Left" or "the Opposition"). The government at the time was headed by Count Badeni (a Polish aristocrat whose full name was Kazimierz Felix), known as a "strong man" for his overbearing governance of Galicia. His appointment resulted in the slow collapse of German control over the monarchy. The reason for the 1897 legislative crisis was that Badeni had issued a language ordinance that gave Czech equal status with German even within the "inner service" (meaning between government departments). The German liberal opposition was so incensed that it vowed to obstruct the Ausgleich renewal until, in Twain?s words, "the obnoxious Czech-language measure should be shelved." In the wake of the often violent protests, both within the House and in Prague, Vienna, Graz, and elsewhere in the monarchy, Emperor Franz Joseph dismissed Badeni. In the absence of a majority within the House, however, legislative action came to be undertaken increasingly by imperial emergency provisions which the parliament was not in session. This in turn further sapped the government of its remaining legitimacy. Twain outlines all these events with characteristic wit in this piece.