Impossible Difference: "Writing" and the Question of Community in Modern and Postcolonial Literature 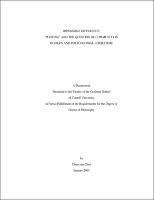 This dissertation contests indiscriminate valorization of "difference" and its cognates in postcolonial discourse by shifting attention to the ontological "impossibility of difference" of postcoloniality and to the ethical demand born of such an ontological consideration. The study begins with an analysis of Charles Baudelaire's treatment of the ethos of sameness in his lesbian poems. My argument is that at a time when the conceptualization of difference is assuming formative importance in modernity's political philosophy, cultural imaginary, and epistemology, Baudelaire's work is already undermining the Self-Other demarcation. The reason for my extending the scope retroactively to European modernity is that Baudelaire's time, as I view it, marks a historical juncture where the Self-Other dynamic begins to materialize a certain episteme by assuming a material "content." Then, spanning the work of writers from a wide range of areas including Salman Rushdie (Indian British), Theresa Hak Kyung Cha (Korean American), and Dancing Crane (Taiwanese), this study examines, in particular, the way in which these writers approach the impossibility of difference by problematizing the concept and praxis of writing. That is, writing assumes a quasi-ontological status and functions as the site where the postcolonial subject materializes his/her conception of "community." The governing argument of the study is that the singular reliance on the singularized Self-Other model in the construction of postcolonial theory risks neglecting the relationship between the self and the collective, which too constitutes a crucial portion of the subject's ethico-political experience. Secondly, since the Self-Other model is conventionally premised on a power relation, sanctification of this model as the prominent language in postcolonial theory risks losing sight of postcolonial theory's own limitations, especially the confinement of political idioms. I argue that to consider postcoloniality in light of "community" is to configure postcoloniality not merely as a historical juncture but as a futurist episteme anticipating an emancipatory agenda that can break out of the dilemma of the idiom of difference and difference-driven identity politics. Theorists discussed in this study include Walter Benjamin, Jacques Derrida, Jean-Luc Nancy, and Emmanuel Levinas.