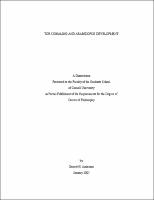 TOR (target of rapamycin) proteins are central regulators of cell growth in eukaryotes. Acting as protein kinases, they integrate nutrient, amino acid and hormonal signals to regulate ribosomal activity, mRNA recruitment to the ribosome and other processes via the phosphorylation of downstream activators. Their ability to phosphorylate target substrates depends on the activity of a second conserved eukaryotic protein, Raptor (regulatory associated protein of TOR), which as a TOR binding partner presents substrates to TOR for phosphorylation. Mei2 is a putative TOR substrate in the fission yeast Schizosaccharomyces pombe. It acts in concert with a noncoding, mRNA-like molecule meiRNA to trigger meiosis in conjugated diploids under low nutrient conditions. Mei2 is present as a single-copy locus in a variety of eukaryotes and as a small conserved gene family in land plants. This thesis describes efforts to characterize the Arabidopsis Raptor and Mei2 homologues as a means of understanding TOR signaling in land plants. Using a reverse-genetics approach, I have isolated Arabidopsis lines harboring disruptions of the Raptor homologues AtRaptor1A and AtRaptor1B, and crossed these lines to generate AtRaptor double mutants. AtRaptor1B mutants show subtle defects to root and shoot development; AtRaptor double-mutants show normal embryonic development but arrest growth as seedlings with minimal post-embryonic meristem-based growth. AtRaptor1B interacts with the Arabidopsis Mei2 homologue AML1 (Arabidopsis Mei2-like 1) in a yeast two-hybrid assay, in an interaction mediated by the AML1 N-terminus. This implicates AML1 as a substrate for AtTOR in Arabidopsis TOR signaling. Using reverse-genetics complemented by a phylogenetic analysis of the AML gene family in Arabidopsis and elsewhere in the angiosperms, I show that there are two conserved clades of AML-like gene products in the angiosperms. There is considerable redundancy among and between members of these clades. Single and higher-order mutants harboring disruptions of the AML loci yielded subtle defects in the timing of the transition to flowering. A line homozygous for disruptions in all five AML loci did not differ dramatically from lower-order insertion allele homozygotes; this may be due to accumulation of transcript fragments expressed from the disrupted AML5 locus.