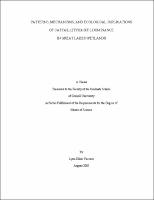 Many wetlands of the Great Lakes region are increasingly dominated by species of cattails, including the native Typha latifolia, the introduced Typha angustifolia, and their hybrid Typha glauca. Cattails are observed to form dense stands of live and dead biomass that may reduce plant diversity and compromise wetland habitat value. Cattail expansion has been used as an indicator of environmental change in the Everglades, but a broad analysis of the distribution and impacts of the northern species has not been conducted. In this study, I examined the patterns of cattail distribution across the Great Lakes, explored one mechanism by which cattails attain dominance in several Lake Ontario wetlands, and experimentally measured the effect of cattail biomass on plant species diversity in one wetland. Patterns at the regional scale were addressed by analyzing vegetation surveys of 90 wetlands around the Great Lakes. Surveys were conducted in collaboration with scientists from the University of Minnesota, Duluth and the University of Wisconsin, Madison as part of an EPA-funded research program, the Great Lakes Environmental Indicators project. I compared patterns of dominance of invasive Typha (T. angustifolia and T. glauca) with those of five co-occurring, native graminoids, Typha latifolia, Sparganium eurycarpum, Calamagrostis canadensis, Carex lacustris and Schoenoplectus tabernaemontani. In contrast to the native species, the invasive Typha species represented a larger proportion of the plant cover in wetlands where they occurred (16% vs. 2 - 9% for natives), and their occurrence was associated with lower species density (7.1 vs. 8.6- 9.7 spp/m2 for natives). Unlike the native species, the relative cover of invasive Typha was positively related to an index of agricultural intensity calculated for a wetland's watershed (p<0.001). Agriculture uniquely explained 10% of the variation in the relative cover of invasive Typha, after accounting for variation due to lake identity (21%) and mean water depth (6%). Among six Lake Ontario wetlands, I investigated the relationship between cattail abundance, litter accumulation, and species density in two hydrogeologic settings. I hypothesized that litter biomass would be higher in the Typha-dominated, open embayment wetlands than the protected wetlands that contained a mixed marsh meadow community. The mean biomass of all litter was higher in the open wetlands (1.7 - 2.6 vs. 0.4 -1.2 kg/m2 for protected sites) and litter biomass was negatively related to species density (r2=0.88, p=0.005). I further explored whether variation in litter biomass could be explained by differences in production, decomposition or hydrology. Peak live biomass was similar across the six sites. Decomposition rates in the fallen litter layer explained some of the variation in total litter (standing and fallen), but could not account for the overall higher accumulation in the open wetlands. Between May and September 2004, wetlands open to the lake experienced a narrower range of monthly water levels than the protected wetlands. The more stable water levels and the higher density of standing cattail litter in the open wetlands may be limiting the physical removal of litter, resulting in greater litter biomass. Within one cattail-dominated wetland, I experimentally tested the hypothesis that an accumulation of cattail litter reduced species density. I added and removed both standing and fallen litter, and transplanted test seedlings into all plots. After 14 weeks, I found that fallen litter negatively influenced seedling survival (p=0.061) and species density (p=0.024), but the effect of standing litter was insignificant. In summary, both observational and experimental data indicate a negative relationship between cattail litter biomass and species density. Therefore, factors affecting cattail litter production (e.g., agriculture) and decomposition (e.g., water levels) could have important implications for cattail dominance and species diversity in Great Lakes wetlands.