MECHANISM OF RESISTANCE TO BEAN COMMON MOSAIC VIRUS CONFERRED BY THE I LOCUS IN PHASEOLUS VULGARIS L. 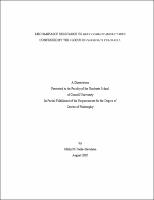 Resistance employed by plants to combat infection by pathogens from a broad range of species is frequently mediated by resistance genes (R genes). While R genes are known to be involved in pathogen recognition, how they convey this message to host defense machinery is not completely understood. These studies employ genetics and cell biology to evaluate the interaction of pathogen infection in resistant and susceptible host plants. The system used here is the I locus of Phaseolus vulgaris L. and the Potyvirus, Bean common mosaic virus (BCMV). Near isogenic lines for the I locus were challenged with BCMV at 20?C, 26?C and 34?C, and assayed over time using a number of different techniques. A protoplast system was developed for use in transfection experiments for determination of viral replication in the presence of the I allele. Confocal laser scanning microscopy was used in combination with fluorescence immunostaining to localize viral coat protein in resistant and susceptible responses. Genes that are differentially expressed in these isolines at 26?C and 34?C following inoculation with BCMV were detected using cDNA-AFLP. Protoplast experiments revealed that BCMV is able to accumulate in genotypes containing zero, one, or two copies of the I allele, although at different rates. Results from microscopic observations support the protoplast data and show that BCMV infects II, Ii and ii plants but that movement is restricted in resistant genotypes (II and Ii). cDNA-AFLP analysis revealed 20 genes that are differentially expressed during the infection process. Sequence analysis demonstrated that several of these genes are Phaseolus homologs of those known to be involved in plant defense responses in other well-characterized systems.

Cadle-Davidson, M M and Jahn, M. 2005. Resistance conferred against Bean common mosaic virus by the incompletely dominant I locus of Phaseolus vulgaris is active at the single cell level. Archives of Virology. In Press