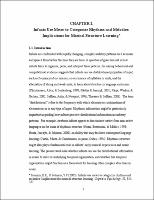 Perception of the temporal structure, or ?meter?, of music enables a range of socially and culturally significant musical behaviors such as synchronized dancing and singing. This dissertation combines developmental and cross-cultural comparisons to examine the perception of musical meter and its development during infancy. The first chapter reports that 7-month-old infants can categorize simple rhythms according to a common underlying meter. Infants also detect contingencies between positions in the meter and individual pitches, an ability that may bootstrap acquisition of knowledge about musical pitch structure. Chapter II shows that Western adults? knowledge of Western meter interferes with their ability to detect rhythmic disruptions in a foreign, Balkan meter. By contrast, adults exposed to both Western and Balkan music throughout childhood perform accurately in either context. Six-month-old infants, who have had relatively limited exposure to music, can detect metrical disruptions in either Western or Balkan contexts, which seems to indicate culture-general perception of meter. Chapter III reports a decline in 12-month-olds? performance only in the foreign musical context, which is consistent with the emergence of culture-specific metrical biases by this age. After 12-month-old infants and adults receive one or two weeks of brief, daily exposure to foreign music, infants can detect the rhythmic disruptions in foreign metrical contexts, but adults cannot. Overall, the findings document early sensitivity to culture-general aspects of metrical structure but rapid developmental change in response to culture-specific musical experiences.

This is my PhD dissertation in two parts.