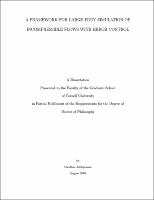 This work developed tools to make Large Eddy Simulation (LES) more easily applicable to engineering problems. An iterative fractional step method was developed for LES. A block-matrix-based analysis procedure proved that two iterations are sufficient to achieve desired second-order temporal accuracy. Stretched Cartesian grids are mapped onto a uniform computational grid. The stencil of the pressure Poisson equation was reduced from seven to five points in each coordinate direction, while still requiring the volume fluxes to satisfy a fourth-order spatially discretized continuity equation to machine precision. The algorithm was implemented in parallel. Improved criteria for comparing sub-grid models was obtained by comparing the statistics from the LES with those from the unfiltered Navier-Stokes equations. This allowed us to clearly define the convergence of an LES approach with resolution length scale, $\Delta$. The difficulty in assessing the accuracy of the statistics obtained from an LES is solved by modeling the statistics of unresolved, or residual, motions. We then combine the ideas of convergence and modeling the statistics of residual motions to give a rationale for the choice of better values for sub-grid model parameters. The performance of these ideas is studied in the context of forced isotropic turbulence and temporal mixing layer. In isotropic turbulence, extrapolation techniques were developed to determine the DNS statistics in the limit of infinite Re. The resolved kinetic energy (KE) converged to the same asymptote for the three eddy-viscosity models studied. Addition of modeled residual KE to resolved KE improved estimate for turbulent KE. Improved values for the sub-grid model parameters were obtained by removing the leading order $\Delta^{2/3}$ term in the total KE. In mixing layer, $\Delta$ convergence of the volume-averaged total turbulent KE degraded with time. Eddy-viscosity models were poor models for residual shear stress because the modeled residual shear stress is aligned with the resolved strain rate. Improved model parameters, which minimized the $\Delta$ variation of the volume-averaged turbulent KE, strongly depended on the time. Hence, for the above low Re mixing layer LES, it is not possible to remove the $\Delta$ variation at all times, by choosing a single set of values.