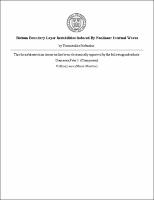 Internal solitary waves (commonly referred to as "nonlinear internal waves" due to the balance between nonlinearity and dispersion, with the intense nonlinearity represented by very strong thermocline displacement in nature) are a ubiquitous feature of coastal ocean, lakes and the atmosphere. Over the past four decades, significant progress has been made in the study of internal solitary waves (mostly in the ocean and in lakes) through combined field, laboratory, numerical and theoretical work. Their interaction with the seafloor is, however, a phenomenon that has only began to be understood during the last decade. In situ observations have shown strong resuspension of sedimentary material in the footprint of internal solitary waves propagating over a gently shoaling bottom topography. Ongoing research through laboratory experiments and numerical simulations, during the last decade, has tried to shed light on the dynamics of benthic excitation under nonlinear internal waves, namely providing a qualitative description of the primary shear instability in the wave-driven bottom boundary layer (BBL). In the current study, 2-D direct numerical simulations (DNS) have been performed in order to investigate the dynamics of the BBL under fully nonlinear internal waves (NLIWs) (as contrasted to weakly nonlinear internal waves described by the appropriate Korteweg-deVries equation). Both elevation and depression waves propagating in a uniform depth two-layer stratification have been examined, with emphasis placed on the latter. The use of a spectral multidomain penalty method model enables the accurate and robust description of the wave-induced BBL at values of Reynolds number (based on NLIW phase speed and wave-guide depth) as high as 100,000. The BBL under elevation waves is found to be stable in most circumstances, but further investigation of a baroclinically-driven instability, observed in some cases, is needed. On the other hand, spontaneous (initiated without any external noise) and intermittent global near-bed instabilities and subsequent vortex shedding are found to occur in the footprint of depression waves, in the separated BBL behind the wave trough, when the wave amplitude surpasses a critical value, which decreases with increasing Reynolds number, oncoming current strength and deeper thermocline. However, an instantaneous insertion of external noise may excite the NLIW-induced BBL and lead to instability development at even lower amplitudes. Our findings suggest that the destabilization of the NLIW-induced BBL in the adverse pressure gradient region is highly sensitive to upstream flow conditions near the bed (oncoming current, potentially seeded with turbulence and the impact of leading wave). The structure of the numerically reproduced NLIW-induced BBL shows strong similarities with its laboratory counterpart, although significant questions remain about the role of three dimensional effects and the initialization of the experiments. Finally, based on our results, we propose that the observed instability mechanism can drive a potent turbulence in nearbed wake in the trailing edge of NLIWs in the actual ocean, thus causing significant NLIW dissipation and providing a highly likely means of sediment resuspension.