Otto Neurath-The Other Modern: Proposing A Socio-Political Map for Urbanism 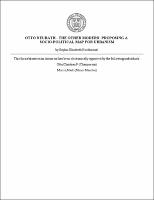 In 1937, Otto Neurath (1882 - 1945) created a map that revolutionized the graphic representation of the city. An Austrian economist, educator, philosopher and member of the Vienna circle, Neurath was also famous for his engagement with picture statistics and quantitative maps. His 1937 map however, marked the beginning of a new tradition: socio-political mapping in the field of urbanism. Originally designed in color, Neurath's map, titled "City Planning," appeared in black, white and red in "Architectural Record" in July 1937 and accompanied the text Visual Representations of Architectural Problems. A compound of symbols, hatches and the spatial abstraction of the city, this map was crucial to the discipline of urbanism, because it represented the first comprehensive solution in illustrating spatial implications along with socio-political components. In addition, the article directly responded to Neurath's failed collaboration with ClAM (Congres Internationaux d'Architecture Moderne) in 1933. Neurath had been invited, as the first non-architect member, to participate in ClAM, in order to advise the Congress on how to illustrate maps for its famous meeting in Athens in 1933. However, due to clashing expectations, the collaboration with ClAM ended without fruitful results. Thus, Neurath created the 1937 map in a response to ClAM But this map was not only crucial because it was Neurath's answer to the largest mapping project of its time, nor because it stood at the beginning of a new tradition. The 1937 map was also important because it marked the culmination of Neurath's theorizing the city, while simultaneously ending his discussion on architecture and urbanism, in which he had actively engaged for more than two decades. Historically, examining the origins of this map reveals Neurath's ambivalent relationship with ClAM as well as his specific skill-set, which eventually superseded the architects' approach to illustrating the city. In elaborating on the evolution of this map and explaining how Neurath eventually pictured spatial parameters of the city as social facts, my project uncovers early efforts at socio-political mapping.