Read Between The Eyes: Cognitive Style Difference Between Americans And Chinese In A Dual-Display Setting 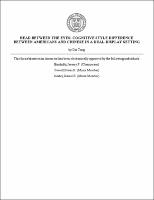 Based on previous literature comparing Westerners' analytic cognitive style and Easterners' holistic cognitive style, we conducted a laboratory study to examine the attention allocation and information reception differences between Americans and Chinese in a foreground-background display setting. Consistent with previous findings, the results suggested that Chinese were better at getting information from the background display, which was located in the periphery of their visual field. In addition, as the visual complexity of the background display went up, Chinese were more likely to redistribute their attention accordingly whereas Americans were less subjected to the change. The findings extended the existing cross-cultural cognitive style research in a novel display setting and a larger physical space. It also generated design implications for systems support multitasking especially background information processing used in an international setting.