Mapping Muhheakunnuk: Gis And The Living Landscapes Of The Mohican Valley 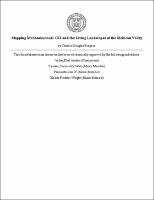 This thesis examines the landscapes of a portion of the middle and upper Mohican (Hudson) Valley in modern upstate New York, in relation to the relatively sparse Late Woodland period archaeological record. The subjects of the study are the Muhheakunnuk, the Mohican people, whose descendants now primarily comprise the Stockbridge-Munsee Band of Mohicans west of Lake Michigan within the boundaries of the State of Wisconsin. Muhheakunnuk signifies both the nation and the river which was their lifeblood, the waters that ebb and flow, constantly in motion. In that spirit, this thesis illuminates the lives of the people by understanding the ecosystems of the river that sustained them. At the same time, by understanding the Mohican people, a new appreciation of the abundance of their land is gained, with powerful implications for the modern inhabitants of the same lands. Most studies of the archaeology of the Mohican tend to either be focused at the site level, or to bemoan the relative lack of settlement evidence. I contend, however, that there is an enormous amount of knowledge to be gained by studying the landscapes in which the Mohican lived, and the historically recorded practices by which they managed these landscapes. As such, a geographic information system (GIS) was built using ArcMap 9.3 combining soil, water and topographic data in order to tentatively reconstruct the landscapes of Muhheakunnuk. These landscapes are interpreted in relation to Mohican management practices and the Late Woodland period archaeological record, in order to provide a foundation for further inquiry.