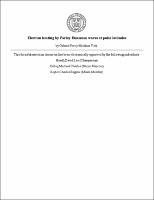 A model to explain the generation of strong electron temperature enhancements in the E region at polar latitudes is proposed and compared with auroral zone coherent and incoherent backscatter radar observations. Experimental evidence from radar observations associates these enhancements with the convective electric field, Ec , and it is now accepted that the mechanism responsible involves Farley-Buneman waves (FB). Extending the linear theory of the FB instability, a quantitative theory to explain the enhancements in terms of wave heating is sought. The RMS magnetic aspect width, k /k RMS , is incorporated in the electron conductivity. Interro- gating the FB dispersion relation for a given external convective electric field, Ec , the magnetic aspect width that gives marginal instability is calculated numerically. Following a recent heuristic model ([21] and [7]) that correlates the parallel electric field with Ec , a corresponding heat source is incorporated in the longitudinal heat transport equation. After solving the longitudinal heat equation, a model that predicts electron enhancements given an external Ec is produced. Using the model proposed, the phase velocity and ion acoustic velocity are compared against an empirical formula ([25] and [24]) that shows heating. It is found that the wave heating model can be used at both high and low latitudes to explains phase velocity saturation if the cooling rate is adjusted appropriately.