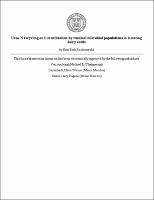 Two experiments were conducted to quantify urea-N kinetics and ruminal microbial populations and their nitrogen (N) transactions in lactating dairy cows under a variety of dietary nitrogen and carbohydrate conditions. In the first experiment, twelve ruminally fistulated Holstein cows were fed one of three diets to provide adequate MP supply and ruminal N balance (Control, 16.3% CP), adequate ruminal N but deficient MP supply (LoMP, 14.1% CP), or adequate MP supply but deficient ruminal N balance (LoRumN, 14.1% CP). A continuous jugular infusion of 15N15N-urea was conducted for a minimum of 72 hours to label the respective pools. Plasma, milk, urine, feces, and ruminal contents, including the liquid associated bacteria, particle associated bacteria, and protozoa, were collected before and after urea infusion for N enrichment analysis. Urea-N synthesis was greatest for cows fed the Control diets and lowest for the LoMP diets, with the LoRumN diets demonstrating intermediate urea-N synthesis regardless of the low N intake of cows on this diet. A greater proportion of urea-N entered the GIT instead being excreted in the urine of cows fed the LoRumN diet (75% vs. 63% for both the Control and LoMP diets). Approximately 8-14% of the microbial N pool was present as protozoal N, and the protozoa predated 4-17% of the total bacterial N yield, with the highest values observed for cows fed the Control diet.   A second study was conducted that fed differing amounts of dietary CP (14.3 vs. 15.8%), starch (23 vs. 29%), with or without the ionophore Rumensin. Urea-N kinetics were determined by dietary CP concentration, with little impact of dietary starch or Rumensin. Microbial pool sizes and N transactions were dependent on dietary interactions, suggesting the effect of Rumensin on these populations to be mediated by rumen conditions. Overall, these studies demonstrate control over urea-N kinetics by N intake, and particularly by urea-N synthesis, over a variety of dietary conditions. Low ruminal N balance, in conjunction with starch fermentation and ionophore effects, was able to stimulate urea-N entry to the GIT, improving efficiencies of N use. The amount of recycled N contributing to microbial N supply, in addition to protozoal predation of bacteria, varied by dietary conditions.