China And The 'Creative' Idiom: A Study Of An Advertising Agency In Beijing 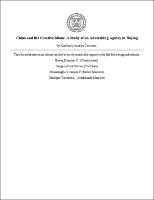 In the last decade, advertising and branding have grown in importance as generators of economic growth for Chinese companies. Additionally, China's leaders have stressed use of creativity in developing a modern and competitive society and economy, as stated in the Eleventh Five-Year Plan. This dissertation is an ethnography of Chinese conceptualizations of creativity and its use as understood by employees of an advertising agency. This account is based on fourteen months of fieldwork carried out at GLBJ, a multinational advertising agency in Beijing. Use of creativity and employees' understanding of what is deemed creative is analyzed through formal and informal interviews, a questionnaire, and participant observation in the account planning department of the agency. Corporate emphasis on the use of creativity in its business operations, and a strong record of success meeting client needs in other countries, grant GLBJ legitimacy as an institution capable of assisting Chinese companies. Yet efforts at satisfying Chinese client requests often hit snags due to differences in the interpretation of creativity by agency and client. GLBJ employees, the majority of whom are Chinese, rely on a western conceptualization of creativity in addressing their work. This conceptualization views creativity as a product of a process where the "new" is the result of a "radical break" from what comes before. Whereas Chinese clients, when expressing an interest in branding, conceptualize its main ingredient, creativity, as a product and process related to the "new" emerging out of "continuity" with that which came before. While creativity is viewed by both set of actors as essential in meeting the aims of branding, they differ on its characterizations. These characterizations are rooted in ideological as well as cultural differences, which are permeated with the ongoing influence of socialist values on client actions. Even as Chinese advertising garners praise for modernizing and moving away from a propaganda perspective, criticism persists over what advertising professionals feel is their clients' "lack" of proper understanding of creativity. What this ethnography illuminates is the contested nature of creativity as a concept in China, and the various factors contributing to this situation.