The Nonprotein Amino Acid Meta-Tyrosine: Its Biosynthesis, Phytotoxicity, And Application As A Tool For Research On Aromatic Amino Acid Metabolism In Plants 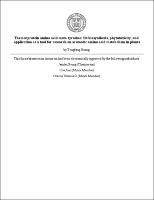 In addition to the twenty amino acids that are universally found as building blocks of proteins, nonprotein amino acids are also present in numerous plant species. One such nonprotein amino acid, meta -tyrosine, is abundant in the root exudates of Chewings fescue (Festuca rubra L. ssp. commutata ). Consistent with the phytotoxic effects of mtyrosine, prior studies showed that Chewings fescue has superior weed-suppressive capacity in field trials involving dozens of turf grass varieties. Further research with m-tyrosine demonstrates that this compound is stored in a different compartment than the protein amino acids, and can be easily washed off fescue roots with aqueous solutions. Chewings fescue roots have enzymatic activity, likely from a cytochrome P450, for synthesizing m-tyrosine from phenylalanine. An EST library was constructed from roots of Chewings fescue and four candidate cytochrome P450 genes are identified and cloned. When added to A. thaliana growth medium, m-tyrosine can be misincorporated into A. thaliana proteins. Several protein amino acids, in particular phenylalanine, partially rescue the toxicity of m-tyrosine. Correspondingly, a screen for m-tyrosine resistance in A. thaliana identified a mutant that over-accumulates free phenylalanine. Map-based cloning showed that the genetic basis of this phenotype is a dt2-1D, a mutant allele of ADT2, which encodes arogenate dehydratase, the final enzyme of the phenylalanine biosynthesis pathway. Characterization of ADT2 and its mutant form revealed feed-back regulation of phenylalanine biosynthesis, which depends on a critical motif of the ADT2 protein. Overexpression of the feedback-insensitive a dt2- 1D produces even higher levels of free phenylalanine and has pleiotropic physiological consequences, including abnormal leaf development, resistance to 5methyltryptophan, reduced growth of the generalist lepidopteran herbivore Trichoplusia ni (cabbage looper), and increased salt tolerance. Finally, several hypotheses for m-tyrosine modes of action were tested and discussed.