Identification And Characterization Of Mir-34: A P53Regulated Microrna Family 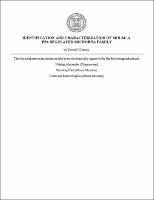 MicroRNAs (miRNAs) are a recently identified class of small non-coding RNAs that have been implicated in multiple developmental processes and disease states. W hile their biogenesis is relatively well understood, their transcriptional regulation is less well characterized and we therefore sought to elucidate the role of the transcription factor p53 in control of miRNAs. Through its function as a transcription factor, p53 regulates hundreds of genes involved i n control over proliferation, apoptosis and senescence and mutation in the p53 pathway is identified in almost all human tumors, including epithelial ovarian cancer (EOC) which is thought to originate from the ovarian surface epithelium (OSE). OSE cells were chosen as a model to identify p53 -regulated microRNAs. Using a microarray approach, the miR-34 family of miRNAs was found to be downregulated 12-fold after Cre/loxP-mediated conditional p53 inactivation in OSE in cell culture. Computational analysis identified evolutionarily conserved p53 recognition elements in the mir-34b/c promoter, which were deemed to be functional based upon DNA damage-induced increased miR-34b/c expression only in p53 wild type cells. Functionally, miR-34b and miR-34c cooperated in reducing proliferation and adhesion-independent growth in soft agar when transfected into p53-null neoplastic OSE cells. As a next step in characterization of miR-34 family, their potential involvement in human cancer was investigated. Expression analysis demonstrated that all three members of the miR-34 family are downregulated in human EOC and their reduced expression was correlated with p53 mutation, promoter methylation and copy number variation. Importantly, reduced miR-34b/c expression was correlated with more advanced tumor stage. Consistent with reconstitution experiments in mouse cells, proliferation of human EOC cell line SKOV-3 was reduced after miR-34 reconstitution. Furthermore, cell invasion and motility in Matrigel chambers was also significantly reduced. To gain a more complete understanding of the role of miR-34 family members in vivo, and to test the hypothesis that they function as tumor suppressors, conditional mir-34b/c knockout mice were generated. Characterization of these mice will elucidate the role of these miRNAs in development and in cancer initiation and progression.