Ecological Consequences Of Relatedness: The Role Of Competition And Herbivory In The Community Structure Of Co-Occurring Asteraceae 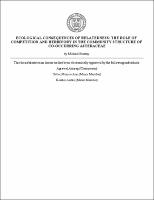 Species interactions, such as competition and herbivory, are believed to be important structuring forces in plant communities. As a proxy for species similarity, the degree of relatedness among species may influence the intensity and outcomes of these interactions. In my dissertation research, I examined whether relatedness influenced the relative importance of plant competition and insect herbivory, and their feedbacks, in structuring the local community of closely related Asteraceae. Focusing on seven common, co-occurring, old-field species (genus Solidago, Symphyotrichum, and Euthamia), I tested the long-standing hypothesis that competition between close relatives is stronger than among more distantly related taxa. I also examined the effects of plant community structure on herbivory by a specialist outbreaking herbivore (Trirhabda virgata), and, in turn, the impacts of herbivory on plant competitive dynamics and community structure. Relatedness was not a reliable predictor of the intensity of competition among the focal species. Outcomes of pairwise competition between close and more distant relatives did not differ in a shortterm greenhouse experiment. Over three years, community productivity and growth of individual species were comparable in field mesocosms containing closely related species or mixtures of more distantly related taxa, in spite of clear differences in competitive abilities among species. However, communities of close relatives experienced greater invasion by other old-field species, highlighting the role of relatedness and competition in broader plant community structure. Community relatedness also determined the extent of damage by Trirhabda, which reflected the insect's host preference hierarchy. Specifically, the preferred genus (Solidago) suffered greater herbivory when growing in mixtures with the less preferred genus (Symphyotrichum) than when growing alone; the opposite pattern was observed for Symphyotrichum. In spite of differential damage, herbivory did not lead to a shift in the competitive abilities or community structure of the focal species compared to communities protected from herbivores; however, insect herbivores promoted invasion of the communities by other old-field species. In summary, my research reveals the consequences of species relatedness in trophic interactions between plants and herbivores, but not directly in plant competition, and underscores the potential feedbacks between plant community structure and herbivory over longer time scales.