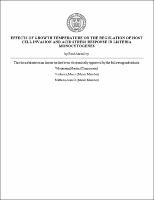 Listeria monocytogenes is a foodborne bacterial pathogen that has been isolated from various natural and urban environments during different seasons and has been shown to persist in food processing environments. L. monocytogenes has the ability to grow at refrigeration temperatures and is therefore a danger to makers and consumers of ready-to-eat (RTE) food products, as these foods are not subjected to a heating step prior to consumption. During transmission from the environment through foods to humans, L. monocytogenes must adapt to a range of environmental conditions including varying temperature, preservative stress, gastric stress, and host immunological defenses. Mechanisms of environmental adaptation in L. monocytogenes include two-component response regulators (RRs), alternative sigma factors, and other positive (e.g., PrfA) and negative (e.g., CtsR) transcriptional regulators. We characterized the effects of L. monocytogenes growth temperature on (i) the contributions to in vitro host cell invasion of 14 RRs, alternative sigma factor [sigma][EXP]B, virulence regulator PrfA and surface associated proteins InlA and FlaA and (ii) the response to sudden acid shock. Overall, invasion was higher for L. monocytogenes grown at 30[DEGREE]C compared to 37[DEGREE]C. RR mutants "cheY and "degU were invasiondeficient when grown at 30[DEGREE]C, but not 37[DEGREE]C. We observed 37[DEGREE]C-growth-dependent functional synergisms between !B and PrfA in contributing to host cell invasion and contributory synergisms between FlaA and InlA at both temperatures. Bacteria grown at 37[DEGREE]C were more resistant to HCl acid shock (pH 3.5) than cells grown at 7[DEGREE]C. For cells grown at 37[DEGREE]C, the transcriptional response to acid treatment involved the induction of genes with prior implication in acid response and intracellular survival, whereas the response of 7[DEGREE]C-grown cells involved the induction of two large operons of bacteriophage genes, which may explain the increased survival of 37[DEGREE]C grown cells. Our data show that growth temperature affects regulation of host cell invasion and the response to acid shock, which are both vital stages in L. monocytogenes transmission. Therefore, growth temperature should be considered an important variable in modeling L. monocytogenes stress survival and virulence.