Agrarian Policies In North ViỆT Nam During The Resistance War, 1945-1953 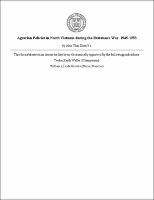 In a fifteen-year period from 1945 to 1960, the Vietnamese Communist Party implemented various agrarian policies designed to break the power of the Vietnamese traditional village elite, to distribute wealth from the elite to the poor, and to form a new class of leaders in order to consolidate power in North Việt Nam. Over the years, many historians have written about these policies, but most have generally concentrated on the official Land Reform, which was implemented between 1953 to 1958, and thus have neglected the significance of the years from 1945 to 1953. Based on new sources and interviews, this thesis examines the Communist Party's ideological assessments, the laws and regulations enforced, and the social and class struggles mobilized during the period from 1945 to 1953. The purpose is to exemplify the fundamental importance of the period as the key stepping-stone in the process of land reform and consolidating of political dominance in rural North Việt Nam. Situated in a weak political and economic position, the Communist Party's initial land policies were conservatively applied to appease the interests and gain the support of both the rich and the poor. However, as the political, economic and military condition improved, land policies began to take a critical shift, provoking intensive implementation of class struggle necessary to abolish the Vietnamese traditional elite and consolidate power.