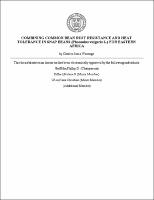 Common bean rust caused by Uromyces appendiculatus (Per.:Pers) Unger, and heat stress limit snap bean production in many tropical and temperate regions. Snap beans that combined broad-spectrum rust resistance with heat tolerance in the same genetic backgrounds were developed and selected for tropical agroecosystems. Eight breeding populations were developed from combination of 'BelJersey-RR-15' and 'BelFla-RR-1' (each containing the Ur-4 and Ur-11 rust resistance genes) and heat tolerant snap bean breeding lines 'HT601', 'HT603', 'HT608' and 'HT611'. Three heat tolerant F5 lines which were homozygous for the Ur-4 and Ur-11 genes were selected. The three selected F5 lines and a rust resistant but heat sensitive control were together with 12 cultivars evaluated in 2009 for reaction to natural rust infection and yield at six contrasting field sites in East Africa and response to heat stress verified in Puerto Rico. Rust incidence and severity was high at three sites. Three of the four breeding lines and only two of the 12 cultivars were rust resistant. The breeding lines showed stable yields in East Africa compared to cultivars currently grown in the region. Yield in Puerto Rico strongly correlated (R2=0.71, P[LESS THAN]0.001) with that of the hottest site in East Africa, highlighting similarity in genotypic response to high temperatures at the two distinct sites. This research demonstrated the effectiveness of Ur-4 and Ur-11 rust gene combinations in tropical environments, and effective selection for heat tolerance correlating across multiple environments. The three breeding lines with proven rust resistance and heat tolerance were utilized in crosses with cultivars currently grown in East Africa with the aim of improving snap beans for the region for the two traits. Twenty breeding lines were selected from the populations developed, evaluated and selected at four distinct field sites in East Africa in 2010. Four high yielding breeding lines ('L5', 'L9', 'L13' and 'L17') that showed high promise with rust resistance and heat tolerance in desired plant types were selected. Advancement and subsequent release of these selections as cultivars and utilization in breeding programs will improve production of snap bean in eastern Africa and other tropical environments with similar production constraints.