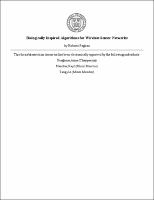 In recent years, several models introduced in mathematical biology and natural science have been used as the foundation of networking primitives. These bioinspired algorithms often solve complex problems by means of simple and iterative local rules. In this work, we consider the design and development of novel decentralized algorithms for distributed systems, with applications to wireless sensor networks, wireless body area networks and formation control. We consider two models of interaction. In one model, nodes communicate via pulses whose arrival time is sensed and compared to a local state variable and triggers an appropriate local update. In the second model, the nodes can exchange integer valued messages, which we call colors. The first class of algorithms falls in the class of Pulse-Coupled Oscillator (PCO) models that were first introduced in mathematical biology and that have been recently introduced in the sensor networking area. This thesis is concerned with the design and analysis of PCO based protocols for synchronization and multiple access. The second class of protocols relates to the so called voting models introduced in Physics. The protocol was proposed for network control in particularly harsh media, where communications are severely limited by the significant distortion and delay of the link.