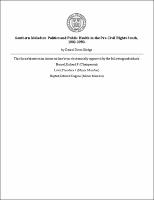 This dissertation explores the development of systems of public health in the American South. It argues that debilitating diseases, including hookworm, pellagra, and malaria, played an important role in southern economic underdevelopment at the beginning of the twentieth century. Between 1930 and 1930, however, a workable system of public health, based on cooperation between the federal government, private philanthropy, emerged in the southern United States. Initially spurred by war, federal intervention was continued as a result of bureaucratic entrepreneurship. In 1935, the system of federal-state-county cooperation developed in the South was nationalized as Title VI of the Social Security Act, providing the framework for our contemporary system of public health. By the end of World Way II, hookworm, pellagra, and malaria had largely been eliminated in the southern United States. This dissertation argues that public health workers, largely unconstrained by accountability to nationallevel governing institutions, created networks of public and private cooperation, which were formalized into institutional arrangements for confronting the region's pressing public health concerns. Public health workers convinced local elites to support public health programs by relying on arguments grounded in local understandings of race, disease, and economic development. Emerging networks of local support and political legitimacy were further underpinned by the genuine threats posed by disease and the demonstrated competence and capacity of the Rockefeller Foundation and the United States Public Health Service. Local support and political legitimacy, generated by entrepreneurial public health workers at the ground level, was translated into nationallevel legitimacy in the aftermath of two focusing events, the 1927 flood of the Mississippi River and the 1930-1931 southern drought. Although the contemporary "Sunbelt" is unimaginable without the elimination of sharecropping and racial segregation and the advent of air-conditioning, it is equally unimaginable without the elimination of hookworm, pellagra, and malaria. Just as outside intervention played a crucial role in the elimination of the South's debilitating diseases, this dissertation argues, the region's paradoxical needs for both outside assistance and local autonomy to preserve white supremacy and segregation played a central role in defining the contours of public health throughout the nation.