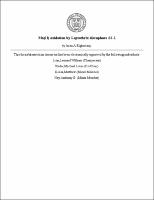 The biological catalysis of Mn(II) oxidation is thought to be responsible for the formation of most naturally occurring insoluble Mn(III, IV) oxides. The physiological benefit and the regulatory mechanism of Mn(II) oxidation remains unknown. A better understanding of environmental conditions that favor or inhibit the production of the extracellular protein(s) responsible for Mn(II) oxidation is a prerequisite for the design of any successful technology that uses Mn(III,IV) oxides for biofiltration and biodegradation purposes. A controlled batch reactor system was developed to study the environmental conditions that regulate Mn(II) oxidation by the model Mn(II)oxidizing bacterium Leptothrix discophora SS-1. Cells were grown in a chemicallydefined medium at neutral pH. Mn(II)-oxidizing activity as well as mofA gene transcript levels were measured. A decline in Mn(II) oxidation occurred under ironlimited conditions, which was not accompanied by siderophore production and is therefore unlikely to be an artifact of siderophore complexation of Mn(III). The data are consistent with a direct requirement of Fe for Mn(II) oxidation. Additionally, Mn(II) oxidation is specifically stimulated by Cu(II) and not by toxic levels of Cd(II). These results indicate that Mn(II) oxidation is not a response to metal toxicity. Interestingly, the temporal variations in mofA transcript levels did not correlate with the observed decline and stimulation of Mn(II) oxidation. This result suggests that MofA may not be directly involved in Mn(II) oxidation. The role of mofA in Mn(II) oxidation was evaluated by cloning and expressing the three genes of the mof operon of L. discophora SS-1 in Escherichia coli. First, the signal sequences of the three genes, mofA mofB and mofC, were screened using an assay that allows the discrimination between the major modes of transport across the inner bacterial membrane. All three proteins were shown to be transported across the inner cytoplasmic membrane by the twin-arginine translocation (Tat) pathway. Expression of full length and mature domains of MofA and MofB showed that the signal sequences enhance the stability of the two proteins in E. coli. Codon optimization was a prerequisite for the successful expression of MofC. MofB and MofC are shown to be extracellular proteins. In addition, MofC is shown to be needed for the folding of MofA and its highly probable subsequent translocation to the periplasm. Interaction of MofA and MofC appear to be responsible for the loss of the FLAG-tag sequence from the C-terminus of MofA which compromised detection of the MofA protein after it left the cytoplasm. Subsequent to cloning and coexpressing the three genes of the mof operon of L. discophora SS-1 in E. coli, no Mn(II)-oxidizing activity was detected in either the periplasm or the supernatant. These findings indicate that MofA is either not the Mn(II)-oxidizing protein of L. discophora SS-1 or that it needs other, as yet unknown accessory proteins for catalyzing Mn(II) oxidation. Further evaluation of the roles of MofA, MofB, and MofC and their link to Mn(II)-oxidation would be expedited by development of a reliable genetic system for L. discophora SS-1.