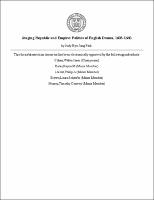 This study argues that the classical legal concepts of dominium and imperium, ownership and rule, illuminate the political tensions of seventeenth century English drama. The concept of imperium was central to seventeenth century debates over the terms of international commerce, setting important precedents for the development of modern international law. Geopolitical disputes over dominium and imperium shadow the developing conflict between republican, monarchical, and imperial models of the English state from the Stuart monarchy to the post-revolutionary English republic. In the drama of the early to mid-seventeenth century, we can trace the emergence of designs for an imperial English state well before the Restoration and the eighteenth century. Moving from the reign of James I to the Protectorate under Oliver Cromwell, this study reevaluates the genres of tragicomedy, closet drama, topical drama, and operatic masques, analyzing Francis Beaumont and John Fletcher's Philaster and A King and No King, Elizabeth Cary's The Tragedy of Mariam, Philip Massinger and John Fletcher's The Tragedy of Sir John van Olden Barnavelt, and William Davenant's The Siege of Rhodes. The aim of this work is to contribute to a more nuanced understanding of the politics of pre-revolutionary seventeenth century drama, beyond the traditional focus on the antagonism between royalist and anti-royalist factions, and to redress the conventional neglect of English drama between the closure of the playhouses in 1642 and the restoration of the monarchy in 1660.