Genetic And Molecular Characterization Of Maize Response To Shade Signals 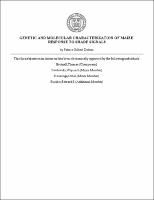 In the dense stand of a typical maize field, chlorophyll and carotenoids pigments efficiently absorb blue and red (R) light but the longer far-red (FR) wavelengths are transmitted through the canopy or reflected by the vegetation. This selective absorption causes a reduction both in the R to FR ratio and in the photosynthetically active radiation. Together, they indicate the proximity of neighboring vegetation and induce a series of adaptive responses collectively known as shade avoidance syndrome. To characterize R/FR signaling in maize, an end-of-day FR (EOD-FR) assay was developed. A survey of genetically diverse inbreds, plus teosinte and a modern hybrid, revealed distinct elongation responses in seedling tissues. A quantitative trait loci (QTL) analysis of EOD-FR elongation responses identified several QTL for the mesocotyl and 1st leaf sheath tissues. The phyB1 phyB2 mutant series, introgressed in B73 and W22 inbred backgrounds, confirmed the central role played by the phytochromes in mediating EOD-FR responses. The contribution of gibberellic acid and abscisic acid to EOD-FR responses was investigated both at constant temperature and when a chilling treatment was applied during dark breaks. To examine the role played by the two PhyB paralogs on plant architecture and flowering time variation, a series of traits were measured at maturity in B73 and W22 introgressions carrying the phyB1 phyB2 mutant series. This analysis revealed that the subfunctionalization of PhyB paralogs was dependent on the genetic background. Results from a pilot experiment with densely planted rows suggest that both PhyB1 and PhyB2 are involved in regulating azimuthal leaf orientation. Variation in plant architecture relative to cardinal position was examined using more than 5000 lines grown in a single field plot. Results suggest that sunset twilight operates similarly to EOD-FR in regulating plant height. That is, plants in the western section of the field, exposed to a higher intensity of FR during twilight sunset, are taller than in the eastern section. Finally, a reverse genetic approach to identify several phyA and phyC mutant alleles is described. Together, these studies provide the most detailed characterization to date of phytochrome response in both seedling and mature maize plants.