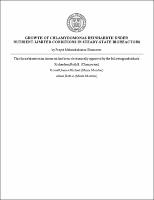 In recent years, massive mobilization of researchers is mounting regarding the development of more sustainable energy supplies, driven by factors such as oil price spikes and the need for increased energy security. Biofuel production is, at its purest, an attempt to wean the world's addiction to fossil fuels. Large-scale algae production has the potential to provide a significant fraction of the liquid fuel market, due to its high productivity per area. In order to realize the great potential of algae for biofuel, economical production systems must be developed that minimize inputs, such as nutrients and water. It should be made more robust, productive and predictable in order to ensure successful scale-up. Using traditional reactor engineering we propose to further the understanding of algae reactor systems by investigating the effects of various bioreactor operating conditions on growth rate, cell composition, and storage of neutral lipids. Chlamydomonas reinhardtii is a model green algae species, widely grown in the laboratory for research in cell and molecular biology due to its fast generation time and ability to grow photo-, mixo-, or heterotropically while maintaining a functional photosynthetic apparatus. The productivity of C. reinhardtii was tested in tubular flow-through photo-bioreactors under steady-state conditions. Reactors were continuously fed media containing different nitrogen, phosphorus and sulfur concentrations. The cell mass density, chlorophyll a and pH were monitored during growth. Algae were harvested and the carbon, nitrogen, phosphorus and lipid content of the cells were measured under conditions of replete and deficient nitrogen, phosphorus and sulfur. The nutrient consumption was calculated by analyzing influent and effluent nutrients concentrations. In experiments where nitrogen inputs were varied from sufficient to limiting, cellular composition changed significantly showing 3-fold higher C:N ratio in nitrogen-deplete cells, and higher carbon content is also supported by four-fold higher relative lipid content. For phosphorus limiting conditions, cells showed slightly higher C:N ratio but no significant increase in carbon content or relative lipid content was observed. Unfortunately for sulfur limitation, cellular composition was not determined so far and thus nothing certain could be said for carbon accumulation in sulfur-deplete cells. Also, no significant change was observed in relative lipid content under this condition. This work also confirms the decline in growth rate affecting final biomass yield (g/L-day) and decrease in cell quota of non-limiting nutrients under limiting nutrient supply. Also, of all the nutrients evaluated, nitrogen was observed to be the most critical nutrient affecting growth rate, cellular composition and neutral lipid storage.