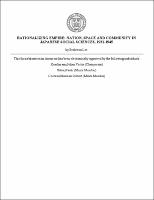 This dissertation explores Asian discourses produced by Japanese social scientists during the wartime period. The intellectual history of the Japanese empire has long been conceived of as a fantasy to be forgotten rather than as an object to be studied. However, this study presents a new thesis: that Japanese intellectuals, social scientists in particular, committed themselves to the Japanese empire in a highly rational and scientific manner, rather than turning to the traditional and particularistic notion of Asia. Contending that beginning in the early 1930s, Japanese social scientists began searching for a new regional order to replace the League of Nations system, this study shows that the concept of Asia emerged as the main subject of social scientific studies in Japan. This dissertation investigates how the notion of a regional system developed by Japanese social scientists was transformed into a highly rationalized vision of imperial knowledge that eventually shaped the intellectual basis for the Greater East Asia Co-Prosperity Sphere in the early 1940s. While taking into consideration various aspects of Asian discourses, this study primarily focuses on how imperial intellectuals in wartime Japan theorized and redefined the concepts of nation, space and community in order to justify Japan's colonial violence, while challenging the notion of Western social sciences as modern, objective and therefore universal. In this process, my dissertation examines the intellectual space of Japanese imperialism where the project of overcoming the West and transcending the dichotomy between empire and colony took place. In the conclusion, this dissertation argues that the project of rationalization and modernization in wartime Asian discourses was not simply a break from the dominant nation-state and modernization discourses in postwar and postcolonial Asia. The purpose of this dissertation is, therefore, to provide a new intellectual perspective for writing a comprehensive intellectual history of Japanese imperialism.