Destabilizing "Racial Harmony": Hybridity, Nationality, And Spatiality In The Law And Cultural Production Of Manchukuo 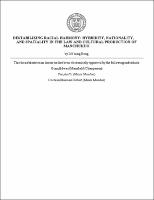 Based on archival research of law, history, literature, and film, my dissertation adopts an interdisciplinary and comparative approach to examine the representations and positioning of "foreigners" in both literary and visual texts, including films, produced in the 1930s and 1940s in Japanese-occupied Manchuria by writers from Mainland China, Taiwan, Korea, and Japan. My central concern in this study is to show how non-colonizers such as Russians, who were perceived as racially white but were not colonizers, and the offspring of interracial marriages between Chinese and Russians, (Taiwanese) Chinese, and Koreans in Manchukuo simultaneously mapped out and destabilized the boundaries of race and nationality within the processes of nation-building and (de)colonization. This study draws upon historiography, narratology, reader-response criticisms, and various literary and cultural theories to examine one of the central concerns: the use of language in narrative and (oral) history; the systems of signs are not only a primary and powerful means to forge racial, hybrid, and national identities; they are also the very location where boundary making and crossing are simultaneously constituted and deconstructed. The flux of asymmetrical but interrelated racial relations reifies to some degree cultural agents' changing ideas of race and racial thinking. Yet the employment of their diverse modes of rhetoric and trope to describe changing ideas of race and racial thinking simultaneously yields unexpected disruptive effects on the essentialization and centralization of nationality, so that the construction and accumulation of national capital are hampered by the same processes of articulation in writing, however inconsiderable and limited the articulations are. Cultural agents' social imagination and creative modes of representing and thinking about boundaries of race and ideas of the social are not strictly confined to building nationality and homogenization and stabilization of space, but rather, they inscribe the possibility of deterritorialization, as well as diverse and discursive historical contingencies that deconstruct race and nationality.