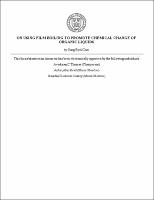 This study presents an experimental demonstration of a chemical reactor based on film boiling. Film boiling is established around a horizontal tube that is immersed in a bulk organic reactant pool of pure methanol and ethylene glycol. Chemical reactions are promoted within the vapor layer due to a high temperature inherent to film boiling. Product gases are measured and analyzed to illustrate the efficacy of the reactor. Catalytic reactions using a platinum catalyst coating and thermal decomposition for a bare tube are investigated. The heater tube surface temperature is the primary parameter and results at various sub-coolings are reported. Experimental results show the feasibility of film boiling to affect chemical change of methanol and ethylene glycol through catalytic and thermal decomposition. Catalytic conversion of methanol and ethylene glycol are observed below the heater temperature of approximately 1300K to avoid possible catalyst sintering at a higher temperature. Thermal decomposition of methanol and ethylene glycol started at approximately 1250K and 1050K respectively. The primary product is synthesis gas and is near stoichiometric proportions for methanol with a small quantity of CH4 produced. For ethylene glycol, condensable by-products are found as well as gaseous products of CH4, C2H2 and C2H4 suggesting various secondary reactions. Boiling curves are also reported which show higher fluxes with a catalyst compared to a bare tube. Conversion efficiency is estimated by an energy rate balance on the control volume of the vapor film. The calculated efficiency resulted in the maximum conversion of 40% for methanol and 27% for ethylene glycol. Endurance tests are conducted to examine the catalyst's performance over prolonged exposure under the film boiling reactor's operating conditions. Carbon deposits forming on the catalyst tube appear to degrade performance. In addition, the experiments of ethylene glycol reveal bulk liquid sub-cooling effects of film boiling instability and low product yields.