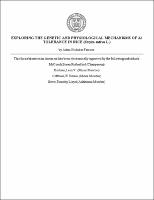 Aluminum (Al) is the most abundant metal in the earth's crust and is predominantly found as a key component of soil clays. Under highly acidic soil conditions (pH[LESS THAN]5.0) it is solubilized to Al3+, which is highly phytotoxic. Al3+ causes a rapid inhibition of root growth that leads to a reduced and stunted root system, thus having a direct effect on the ability of a plant to acquire both water and nutrients. Over 50% of the world's potentially arable lands are acidic and therefore Al toxicity is one of the major limitations to global agriculture. This dissertation examines the genetic and physiological mechanisms of Al tolerance in rice and demonstrates that rice is significantly more tolerant than other cereals. Physiological experiments demonstrate that rice utilizes a novel physiological mechanism that does not involve the well described root tip exclusion of rhizosphere Al mediated by organic acid exudation that has been identified in a number of other crop species. Genetic analysis was conducted using both QTL and whole genome association analysis on a panel of 385 Oryza sativa accessions. This analysis identified that the Japonica varietal group is significantly more Al tolerant than the Indica varietal group and identified loci that confer tolerance both within and across rice subpopulations. Furthermore, admixture analysis identified distinct Japonica loci that increase Indica Al tolerance to levels at or above that of Japonica. The results from this suggest that rice is a unique model to study Al tolerance in cereals and will lead to experiments to further understand Al tolerance and toxicity and develop crop varieties with enhanced Al tolerance.