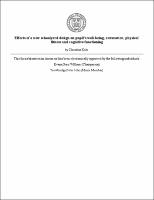 The present study investigates the effects of a participatory schoolyard redesign on the pupils' psychological well-being, restoration state, physical fitness and cognitive functioning. Furthermore, the potential interaction of regular exposure to greenery with the impact of the new schoolyard was examined. The study employed a longitudinal quasi-experimental design with two times of measurement; one before and one after the installation of the new schoolyard features. The study included a total of 195 pupils from the test school (new schoolyard) and two control schools (no new schoolyard). The results indicate positive effects of the new schoolyard especially on psychological well-being, restoration and physical fitness. No significant influences on cognitive functioning were found. Children's regular exposure to greenery in their home environment did not moderate the effect of the schoolyard. Also, the perception of the new schoolyard was highly positive and pupils as well as teachers are more inclined to use it than the old one. Implications for future research and design projects are discussed.