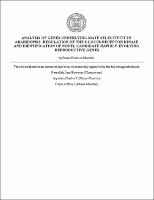 Mate selectivity in plants, as in other eukaryotes, is often based on the activity of highly polymorphic and rapidly evolving reproductive proteins. In flowering plants, selectivity in intraspecific and interspecific matings is observed not only in interactions between female and male gametes, but also in interactions between the male gametophyte with cells of the pistil that line the path of pollen tubes as they make their way from the stigma through the transmitting tract and into the ovary. In the following studies, the model plant Arabidopsis thaliana will provide a useful platform for analysis of intra and interspecific mate selectivity. Intraspecific mate selectivity is often enforced by selfincompatibility (SI), a barrier to self-pollination that inhibits productive pollen-pistil interactions. Consistent with their role in recognition, some genes involved in SI are highly polymorphic and exhibit signals of positive selection. A. thaliana is self fertile, but can be made to express SI by transformation with two functional SI genes isolated from its close self-incompatible relative, A. lyrata. In Chapter 2, an induced mutation that suppresses the SI phenotype of these transformants is analyzed to investigate the regulation of SI. Mapbased cloning determined that the mutation disrupted NRPD1a, a plant-specific polymerase required for DNA methylation and production of some types of silencing RNAs. Subsequent analyses showed that NRPD1a, along with the RNA-dependent RNA polymerase RDR2, is required for SI in some A. thaliana accessions. In Chapter 3, to assess interspecific mate selectivity, a screen was conducted to find rapidly evolving genes in Arabidopsis spp. A full genome sequence and the availability of extensive polymorphism data and genetic resources make A. thaliana ideal for identifying rapidly evolving reproductive genes. Previously generated A. thaliana data sets containing genes expressed in cells of the pistil, pollen, or pollen tubes were used to search for orthologous genes in the recently sequenced genome of A. lyrata. Within- and between-species variation in candidate rapidly evolving genes was investigated and statistical analyses of positive selection were performed. Several candidate genes were identified which may play an important role in species-specific reproductive function.