Structure And Reactivity Of Lithium Enolates: Characterization Of Solution Structures And Rate Studies Of O-Silylations 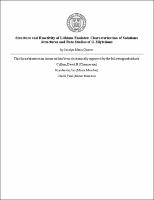 Progress toward understanding the reactivity of synthetically important lithium enolates relies on the ability to characterize their aggregation states in solution. There have been successes in characterizing solution structures of lithium enolates, however, no general method existed until the Collum group's recent efforts to solve this problem. Disrupting the aggregate's high inherent symmetry by mixing two different O-lithiated species in solution is key to developing this general method. Monitoring the resulting ensemble by 6Li NMR spectroscopy in conjunction with the method of continuous variation enables characterization of the solution structure. Most O-lithiated species are disolvated cyclic dimers in TMEDA, with the exception of lithium alkoxides and bulky phenolates. The general method for characterizing O-Li species in solution has enabled rate studies of Osilylations of lithium enolates. Although O-silylations are very common and seem quite simple on the surface, studies reveal a complex mechanism involving LiCl autocatalysis due to LiCl-enolate mixed aggregates. Side product formation and other unexpected observations also contributed to the difficulty in studying the mechanism of O-silylations. Chapter III includes characterization of a C,N-chelated lithium dianion, which was completed in collaboration with the Sarpong group at the University of California, Berkeley.