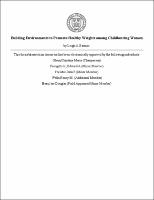 Ecological models of the causes of overweight and obesity emphasize the embedded nature of individual characteristics and behaviors within interpersonal, organizational, community, national, and even global levels of influence. To begin to understand these complex interrelated factors, the food environment in a rural 8700 square mile area of Upstate NY was investigated in relation to a sample of 555 women in early pregnancy living in that area. Household addresses of the 555 women were mapped using ArcGIS (version 9.1, copyright 2001-2004, ESRI, Redlands, CA) and food environments around each woman were created to correspond to all the food stores (N = 870), one, five, ten, and twenty miles from her home. All the food stores were visited in-person and surveyed using a modified version of the Nutrition Environment Measurement Survey for Stores to ascertain the availability of 14 categories of foods sold in these stores. Within each food category, a healthier and less healthy food type was identified, with the exception of the produce category where all foods were presumed healthy. The number of varieties of each food within each food category were counted. Many "non-traditional" food stores such as drug stores, dollar stores, and general merchandise stores were very common in the food environment and were found to sell a wide variety of food. However, fresh produce was only available in 43% of the surveyed stores (mainly supermarkets and grocery stores, and about a third of convenience stores). Less healthful foods like soda and potato chips were sold in nearly all stores. Of the surveyed stores, 54.3% were convenience stores, and this store type was on average the closest type of store to the women. Two ways of handling the challenge of collating and summarizing this large amount of information about the food environment were explored by creating a Healthy Food Availability Index and groupings of stores based on cluster analysis. The cluster analysis created five distinct store categories based on the number of varieties of surveyed foods, but the Healthy Food Availability Index with its wide range of scores from 0 - 37 allowed for finer distinctions between the smaller and non-traditional food stores. Analysis of the relationship between women's residential location and the food environment showed that generally the more stores in a woman's near food environment (one and five miles) the higher her odds for being overweight or obese. Unlike what has been found in several studies of the urban food environment, women having at least one supermarket one mile from home or a supermarket or grocery store within five miles from home were at higher risk for being obese or overweight, respectively, in this rural environment. In addition, this was the first known study to analyze the spatial relationship to a natural food stores and found proximity was associated with a reduced odds of being obese. Further analysis in a subset of the lower income women showed that more supermarkets and food stores of any kind five miles from a woman's home predicted more smaller shopping trips made in a supermarket and more frequent smaller shopping trips. More supermarkets within five and ten miles of a woman's home increased the chance that she would score highly on a composite score of daily fruit and vegetable, whole grain and milk intake. Finally, an analysis of the capacity of public health practitioners to work to improve this environment to promote healthy weights showed that many current practitioners are interested in creating environmental change, but face significant challenges for doing so including: a lack of "community time," lack of efficacy for working with non-traditional partners, concerns about getting too involved in local power and politics, and a need to learn more about effective approaches for environmental change.