Geographies Of Occupation: Coloniality, Foreign Military Basing, And Struggles Over The Subject Of Sovereignty In Okinawa, Japan 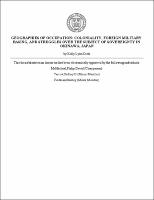 The dissertation explores the theoretical and political implications of the recent emergence of autonomist claims within Okinawa's struggle against US military presence. Combining a world-historical perspective and ethnographic approach, I show how political shifts within the Okinawan demilitarization movement over time are seen as mutually constituted with the historical construction of not just the Japanese state, but state formation more generally: postwar decolonization and the conjoint transformation in military expansion, and more recently the emergence of alternative self-determination claims globally. Postwar decolonization and statemaking legitimized military expansion in ways that obscured the continuing role of colonial relations in overseas basing, while it created new forms of colonial militarization via relations of citizenship. Okinawan autonomist claims against the Japanese state shed light on relations I conceptualize as internal colonial basing. This concept expresses enduring relations of coloniality between Japan and Okinawa making possible America's continued occupation of the islands, but which are obscured by the representational claims of the Japanese state. Rather than a relation through which Okinawans' rights are protected, Japanese citizenship is the mechanism through which colonization and militarization shape and sustain one another. Everyday experiences of foreign military basing intertwine with national and interstate arrangements to shape Okinawans' perception of their citizen relations. Conditions of internal colonial basing reinforce Okinawans' experiences as ethnically marginalized citizens, while simultaneously eroding the legitimacy of the Japanese state in ways that sustain citizenship as a salient identity. As a relation rooted in coloniality, Okinawans' citizen relations thus shape the struggle in potentially transformative ways. Okinawans' claims upon the state-reflected in new political identities, coalitions and alternative visions of the state-citizen relation-resonate with movements elsewhere, reformulating citizenship rights in substantive, historically concrete terms that challenge the abstract rights of the liberal subject, and politicize the meaning of sovereignty. Through the lens of the anti-base struggle, the dissertation thus sheds light on a broader politics of self-determination. By contributing to the erosion of citizenship and the crisis of the Japanese state in the Okinawan political context, the United States jeopardizes the legitimating apparatus it has relied on for more than thirty-five years.