Ascetic Ideology And The Satiric Mode In Piers Plowman 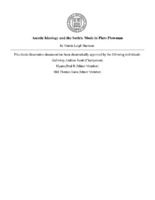 William Langland's Piers Plowman is a richly imaginative work keenly interested in human nature and the society of its day. Precisely because of those concerns, readers of this major fourteenth-century visionary poem have long investigated both its status as a satire and the character of the religious thought on which it draws. A detailed examination of how the work's ascetic outlook shaped its satire has not been performed, however. This is surprising, because satire also centrally concerns itself with identifying flaws in the character and conduct of both individuals and groups. Moreover, ascetic thought greatly influenced the interpretation and writing of satire well into the central medieval period. This study explores how Langland's poem, although late-medieval and vernacular, makes thorough use of that long-standing connection. Part I (chapters 1 and 2) identifies Piers Plowman's loose participation in a formal "genre" of medieval satiric poetry: one characterized by ambiguity and, throughout the Middle Ages, by hybridity. Chapters 3 through 5 (part II) move beyond discussions of genre (an historically contingent set of formal characteristics) to the work's use of the satiric mode (a particular descriptive stance). Scholars have recognized the influence of ascetic "contempt of the world" (contemptus mundi) in the poem-but this principle needs to be examined in conjunction with fellow "walls" in the so-called "cloister of the soul." These influence the poem's narratorial selfcriticism, social criticism, and views on judging others. Part III (chapters 6 and 7) considers Langland's prophetic ideal, suggests an audience that could have appreciated it, and traces a posterity that increasingly did not.