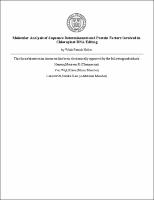 In land plants, RNA editing converts 25-40 cytidine nucleotides within chloroplast transcripts to uridines and approximately 500 such conversions occur in mitochondrial transcripts. Shared or similar mechanisms and machinery are believed to underlie RNA editing in both organelles. In order for a particular C-target to be correctly recognized and edited, two distinct components are required: the cis-element, a sequence component contained within the transcript itself, and trans-factors, protein components which are recruited to the cis-element. Prior studies that utilized editing assays in planta and in vitro allowed characterization of cis-elements for a number of C-targets and revealed that subsets of C-targets are related. Although a high level of sequence identity near related C-targets has not been observed, mapping of a competition element to a 5 nt block, located 20 nt upstream of the maize Ctargets rpoB C467 and rps14 C80, was achieved using an in vitro assay. This region is likely to be a binding site for an as of yet unidentified common transfactor. A number of trans-factors, all members of the pentatricopeptide repeat (PPR) protein family, that affect other C-targets have begun to be identified in recent years. One such protein, RARE1, was identified by a reverse genetic screen of chloroplast PPR proteins. Comparative genomics was utilized to predict orthologous pairs of PPR proteins encoded by the genomes of Arabidopsis and rice. A subset of Arabidopsis-specific chloroplast PPR proteins were studied as possible editing factors for Arabidopsis-specific RNA C-targets, leading to the identification of RARE1. PPR proteins apparently do not have catalytic editing activity themselves and are postulated to form complexes with another protein containing this activity. To discover additional trans-factors participating in RNA editing, immunoprecipitation of RARE1 was performed and the constituents of the co-immunoprecipitate were identified by mass spectrometry. One candidate from this analysis, RIP1, was confirmed to interact with RARE1 by yeast two-hybrid analysis, although RIP1 does not contain any characterized domains and its function is unknown.