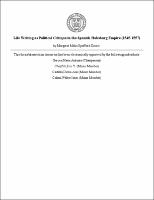 This dissertation examines works of life writing by "outlaws" -individuals who defied the sovereign's law while remaining engaged with it- in the Spanish Habsburg Empire under Charles V, from 1545 to 1557. Life writing, as State-sponsored, official history (historia pro persona), focused on the lives of illustrious men and sovereigns, and was used during the early modern period as a tool of the Spanish Crown to reinforce its sovereignty. Such lives also held a synecdochal relationship to Spain's emerging sense of national identity. As Emperor, Charles V accorded life writing unprecedented importance. Even as he sought after monarchia univeralis, he faced extreme challenges to his sovereignty during the period I study, including the crisis with the corsairs and the Ottoman Empire in the Mediterranean, the rebellion of the conquistadors in the Americas, and the schism of the Church and Empire as a result of the Reformation in Europe. Through historia pro persona, Charles V hoped to secure his own reputation and achieve greater unity in the Holy Roman Empire. Historians who wrote about, or were considered, outlaws, by using a legal and "official" form of writing of great value to the Emperor, were thus able to craft a daring political critique. I examine four works of life writing: Francisco Lopez de Gomara's Cronica de los corsarios Barbarroja (1545), in which he narrates the lives of the corsairs Aruj and Khair-ad-din Barbarossa, as well as his History of the Conquest of Mexico (1552), which focuses on the life of Hernan Cortes; Alvar Nunez Cabeza de Vaca's Comentarios (1555), regarding his failed governorship in the Rio de la Plata region; and Hans Staden's True History (1557), which chronicles his captivity in Brazil in the context of the Reformation wars. These texts spoke to the precarious status of Charles V's apparently hegemonic and homogeneous institutions and policies. In considering "unofficial" life writing alongside official historia pro persona, we gain a much richer understanding of the development of this historiographic subgenre, as well as its implications for political critique in Charles V's transatlantic Spanish Empire.