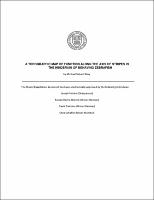 The work described here represents an investigation into the functional organization of interneurons in the hindbrain of larval zebrafish. Four-day-old zebrafish are already freely swimming and can perform many of the adult motor behaviors, indicating that the networks are wired and functional. The hindbrain is, however, strikingly simple at this time. It is organized into a series of stripes, each with a particular neuronal type (based upon morphology and transmitter phenotype), with the neurons within a stripe arranged according to age and input resistance. Using calcium imaging and whole cell patch clamp, I tested the hypothesis that different populations of neurons along the axis of a stripe are recruited as a function of swimming speed. I found that younger, dorsal neurons in a stripe are recruited at lower swimming frequencies with older, more ventral neurons continuously recruited as swimming frequency increases. This illustrates a fundamental principle of organization in the hindbrain of larval zebrafish: that time of neuronal differentiation is a predictor of functional role. This functional organization has parallels with the pattern previously described for spinal cord, suggesting that it is a basic organizational principle that exists broadly in the nervous system. This simple organization, which is present at a time when the fish is already freely swimming, is likely masked later in life as neurons migrate and intersperse to form nuclei. The overall networks, however, are apparently established via a simple topographic, age-related patterning early in life, with neurons driving fast movements arising the earliest and increasingly slower ones layered on over time.