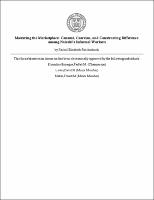 The global labor force continues to undergo complex processes of informalization and urbanization, especially, in African economies. So far, however, studies of these processes have been mostly preoccupied with monitoring the size, growth, working conditions, economic returns, and types of informal work. This dissertation complements and expands the existing literature by exploring the historical, political, and sociological processes that have contributed to global and national understandings of informal work In Kenya, informal employment comprised more than 75 percent of total employment in 2004 (Republic of Kenya 2005b). Despite the potential for a large unified constituency, informal workers remain politically marginalized and divided, unable to mobilize for collective rights. This research seeks to understand this marginalization by exploring the effects of international and national relations of power in the field of informal work. Through both primary and secondary data collection, this project uncovered relations of power between multilateral organizations (particularly the ILO, World Bank, and IMF), Northern academic institutions, powerful Northern States (particularly the U.S. and the U.K.) and the Kenyan State, which have influenced the construction of global and local informal identity. This work also exposes mechanisms of power operating in the field of informal work, including normalization, consent, and coercion, and economic control that have limited the degree to which informal workers see themselves as a collective force or find social or political solidarity with other informals. Without this collective identity, informals have been unable to form a strong front to lobby for political representation despite their legal claims to it. Evidence presented in this study reveals that informal workers face a number of barriers to collective mobilization including government repression, co-optation of leadership, political patronage, fomenting of ethnic divisions, and policies that privilege elites. Informals have formed both large and small organizations to combat these elements with limited success. Recently, however, an umbrella organization of hawkers and traders has been formed, uniting over 5,000 workers to lobby for representation on the current draft of the Micro and Small Enterprise Bill. This study finds that informal workers are not passive recipients of structural forces but actors who negotiate power and contest marginalization. These are positive signs that informal workers are beginning to mobilize for lasting political and social change that will help them support their livelihoods and improve their lives.